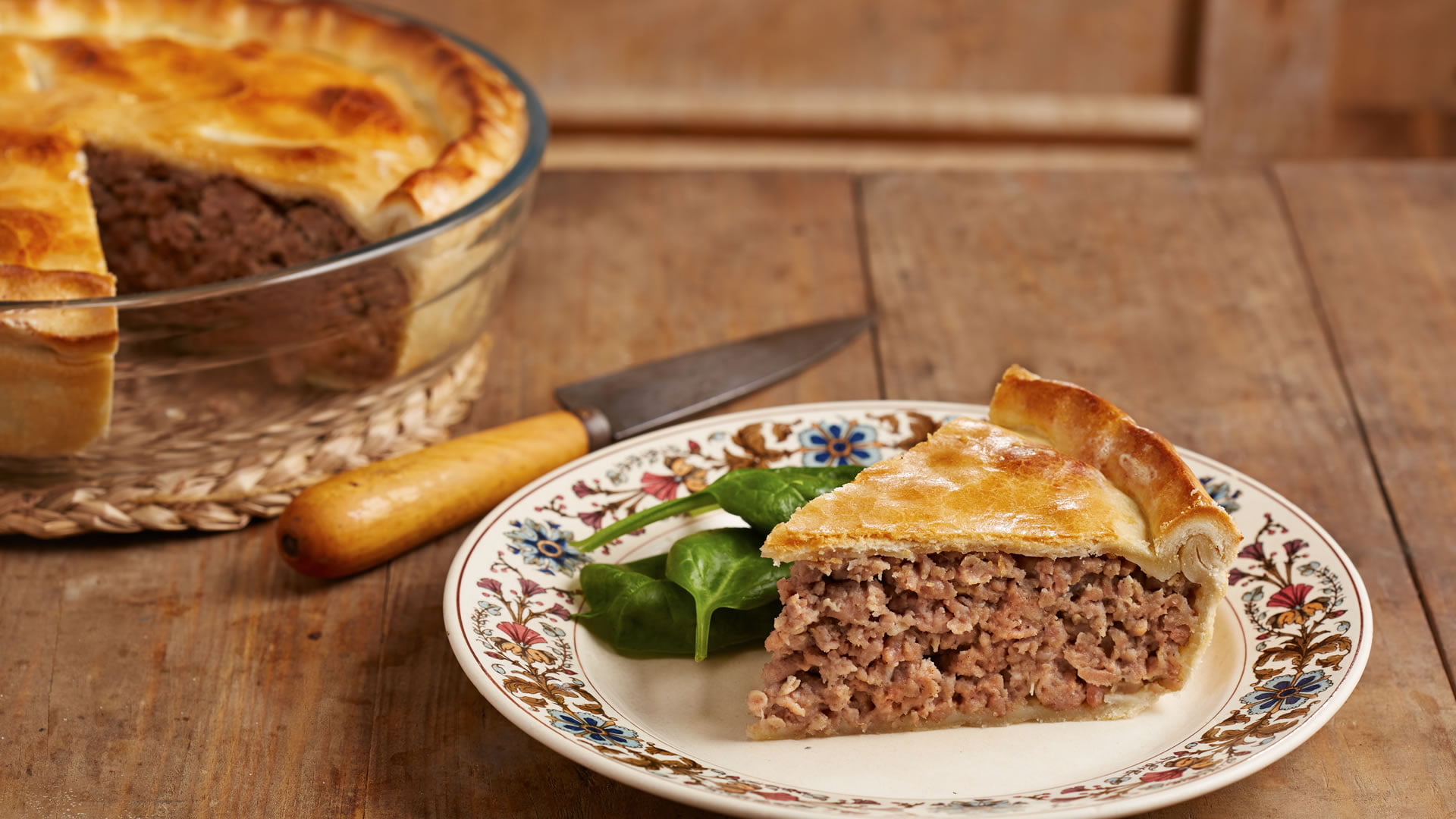 Cook onions (chopped fine) in butter until clear, add meats and cook until browned. Cover with water and cook over low heat until water is all absorbed about 1 ½ to 2 hrs. Drain all remaining fat and liquids. Add spices and mix thoroughly.

While the meat mixture is cooking, peel and cook your potatoes. When done, mash them as you would for regular mashed potatoes.

While potatoes and meat are cooking, prepare regular recipe of pie crust or use ready-made pie crusts in two 9” pans.

When meat and potatoes are cooked, mix the two until thoroughly blended and fill the pie plates with mixture. Cover pies with crust, pinch edges, cut steam vents with fork and baste with milk.

Bake at 375 degrees for 45 minutes or until the crust is golden brown. Serve warm.

NOTES from Rita Dube
Known as “pate a la viande” which translates to meat pie, it is a dish that has been passed down from Rita Dubé’s generation. Some prefer to use all pork and no beef. This is a matter of taste, but both are very good.

Going back in time, the origin of tourtieres comes from pies made with large birds called “tourtes” until these became extinct. Some claim that tourtiere recipes obtained their name from the deep baking dish (tourtiere) in which they were baked. Since the disappearance of tourtes, various kinds of meat mixtures, especially pork, are used in this dish. The pig was an especially important animal on most farms in Quebec. Some recipes call for a mixture of ground ork and ground beef or ground veal. The most popular of these is all pork. It is a meat pie which originated from Quebec.

Our friends across the sea in France considered the touritere pie-dish a kitchen utensil for cooking pigeon and other birds. The dish was known as “piece tourtiere.” As the years passed, the word tourtiere came to mean a pate of fowl or game cooked and seasoned according to a special household recipe in the family stew pan, for into it went not merely turtle doves, but every kind of edible bird. It was in this way that some women began to prepare “pieces tou-tieres” not only with birds, but with meat of both wild and domestic animals. These recipes provided more filling and sustaining meals.

The tourtiere is a traditional Christmas and New Year’s Eve dish with all Franco-American families, but it is also enjoyed and sold in grocery stores all year long. When families returned from midnight mass, there was always a big celebration called a “Reveillon” and tourtiere was always a main dish at these gatherings.

This kind of pie is known as “pate a la viande,” meaning meat pit. Tourtiere is not exclusive to the province of Quebec. It is a traditional French-Canadian dish served by generations of French-Canadian families throughout Canada and all New England states where many immigrated. It is a dish that has been passed down from generation to generation and continues to be one of the favorite and most popular typical Franco-American meal.