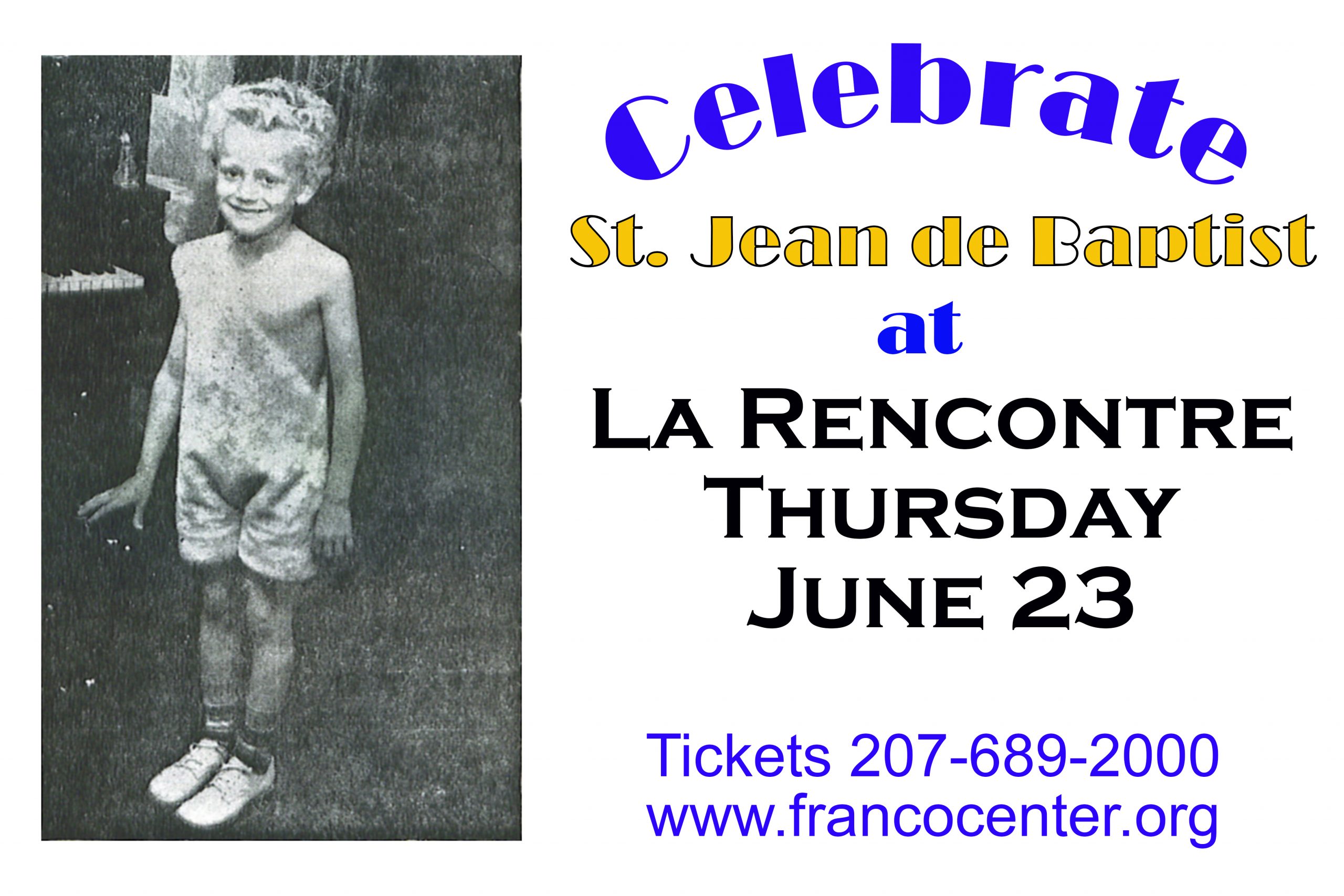 PHOTO CAPTION:  St-Jean-Baptiste Day is the theme of the June La Rencontre. The event starts at 10 a.m. Thursday, June 23. Tickets must be purchased by noon June 20. Photo from Lewiston Evening Journal, June 20, 1953. The caption states that “Roger Bouffard will have a special place in the St. John’s Day parade. He will represent St. John the Baptist as a shepherd boy. Roger will ride on one of the principal floats in the big parade. Commemoration of the nativity of John the Baptist is one of the oldest of the Christian feasts, if not the oldest. Unlike other saints, John the Baptist is honored on the day of his birth, June 24, rather than on the date of his martyrdom or death. He is the patron saint of French Canadians by Papal decree; and the patron saint of Franco-Americans by adoption. Celebrations in his honor traditionally have been bigger than the American Fourth of July.”

LEWISTON–The Franco Center on Lewiston’s Riverfront will host La Rencontre at 10 a.m. Thursday, June 23. Featured that day will be displays about St-Jean-Baptiste Day, recognized as a national holiday in Canada. Tickets for this event are on sale through the Franco’s box office and must be purchased by noon on June 20 as tickets will not be sold at the door.

St-Jean-Baptiste Day was so widely supported in Lewiston and Auburn by the Franco community that two parades were held on the same day one year. The last float in the parade was always of a little boy dressed as a shepherd representing the patron saint of Canada. The last parade in Lewiston-Auburn for this special day was held in 1966.

Laurence Gagnon, from the Quebec Delegation in Boston, will be in attendance to offer a few words about St-Jean-Baptiste. The Franco-Collection at the University of Southern Maine’s Lewiston-Auburn College has provided a display of vintage photos and artifacts from its archives featuring members of the local Franco community.

La Rencontre, which translates to “the gathering,” is similar to an old-fashioned French-Canadian kitchen party with socializing, food, and music.

The 11:30 a.m. lunch will consist of chicken pot pies, cole slaw, and whoopie pies, and will be followed by musical entertainment provided by Don and Cindy Roy. Known for their Franco-American traditional music, the Roys have performed across the country together for over 40 years, Don on fiddle and Cindy on piano and step dancing.

The ticket price of $15 includes meal and entertainment. The Franco Center on Lewiston’s Riverfront is at 46 Cedar Street. Parking is available in the mill lot; handicap parking is located near the elevator entrance in Lincoln St. Alley.