Bells ringing throughout Lewiston and Auburn 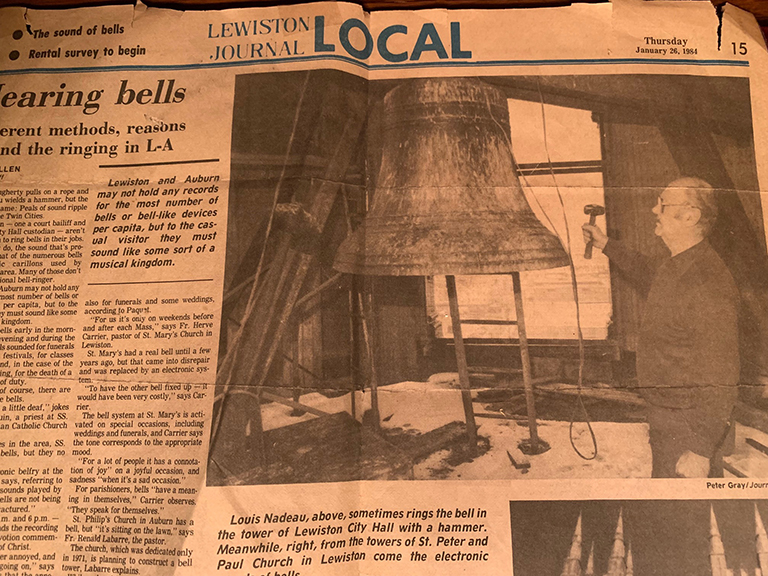 Recently discovered files and news clippings in the Franco Center’s archives provide more information about the bells on various buildings in Lewiston and Auburn, including the former St. Mary’s Catholic Church at 46 Cedar St., Lewiston.

Here are excerpts from the article “Hearing bells: Different methods, reasons behind the ringing in L-A,” by reporter Tim Allen, published in the January 26, 1984 edition of the Lewiston Journal.

Like other churches in the area, SS. Peter and Paul has bells, but they no longer are used.

“We have an electronic belfry at the present time,” [Rev. Herve F.] Drouin says, referring to the recordings of bell sounds played by the church. “The big bells are not being used because they’re fractured.”

St. Patrick’s still uses the 6,000-pound bell which was blessed in 1892, but it is rung electronically, not by hand.

St. Louis has a real bell and a real bell-ringer. He sounds it 15 minutes before Mass on weekdays and weekends, and also for funerals and some weddings, according to [Fr. Hubert] Paquet.

St. Philip’s Church in Auburn has a bell, but “it’s sitting on the lawn,” says Fr. Renald Labarre, the pastor.

The church, which was dedicated only in 1971, is planning to construct a bell tower.

“For us, it’s only on weekends before and after each Mass,” says Fr. Herve Carrier, pastor of St. Mary’s Church in Lewiston.

St. Mary’s had a real bell until a few years ago, but that came into disrepair and was replaced by an electronic system.

“To have the other bell fixed up — it would have been very costly,” says Carrier.

The bell system at St. Mary’s is activated on special occasions, including weddings and funerals, and Carrier says the tone corresponds to the appropriate mood.

“For a lot of people it has a connotation of joy” on a joyful occasion, and sadness “when it’s a sad occasion.”

For parishioners, bells “have a meaning in themselves,” Carrier observes. “They speak for themselves.”

The priest from SS. Peter and Paul noted the recording of the church bells was played through the electronic belfry at 7 a.m. and 6 p.m. The recording was of the “Angelus,”(Latin for angel) a devotion commemorating the incarnation of Christ.

This link will bring you to an article about the origins of Angelus the devotion and the bell ringing.

This link will bring you to a video recording at St. Anthony in Milwaukee while the Angelus is being rung.

And this link will bring you to a video recording of fun-sounding multiple bells ringing. 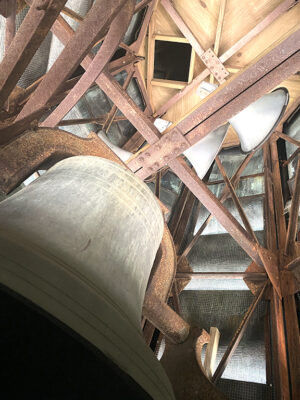 The bell inscription reads “HENRY N HOOPER CO” in raised lettering. The year was 1854. We would like to know where St. Mary’s Church purchased the bell when the church was built in 1927.  Henry Northey Hooper (1799-1865) was a preeminent 19th-century American manufacturer and merchant of decorative lighting, Civil War artillery, and bells and chimes. He was a Boston politician and foundry owner and in his firm he cast the first life-size bronze statue in the United States. Hooper was an apprentice at the Paul Revere Foundry (the patriot’s great-grandson) which he later purchased.

Staff at the Franco Center recently unlocked and opened the electronic bell control box in the former sacristy. We didn’t know what we would find or if the “bells” (loudspeakers in the steeple) were still connected to the controls. We discovered the electronic bells in the steeple can broadcast recorded tape cassettes! That’s kind of dated. There is an option for four microphones. The AUX port enables other devices to be connected such as a laptop. 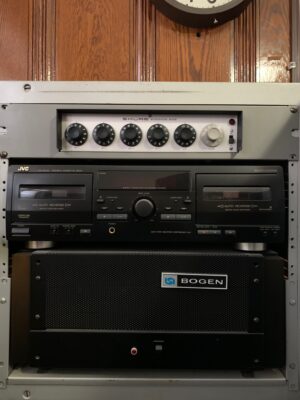 Staff played the nearest tape cassette (Maine fiddle music) and found that the speaker for the cassette player doesn’t  have audio inside the church, but can be clearly heard on the sidewalk outside the church. It was a beautiful sound, clear and crisp. Upon further investigation, staff learned that taped church bells ringing various tunes can be purchased online.

We are thinking Westminster Abby bells would have a nice ring to them. What do you think?