La Rencontre at the Franco Center

The Franco Center presents La Rencontre (French for “the gathering”) as a way for our extended Franco-American family in the area to reconnect with each other and with our neighbors. Meals and stories are shared, friends are reunited, and memories are made.

We offer a fully catered luncheon, followed by a performance. Both the menu and the entertainment vary each event. The charge to attend is $15. This event is open to the public.  A ticket is required to attend our luncheon event.  Tickets must be purchased by 4pm on the Monday prior to the luncheon.  Purchase online or call 207-689-2000.

Traditionally in Franco culture, big celebratory meals of this sort would include live music provided by members of the family and their neighbors. Many families like Lewiston’s Jalbert family (Black & white Photo) made sure their kids each learned to play an instrument in order to entertain at such gatherings — and so, accordingly, we invite local musicians to provide live music for our guests. 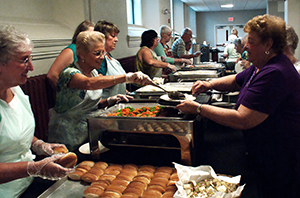 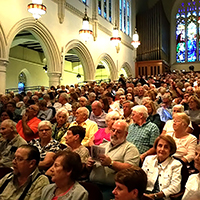 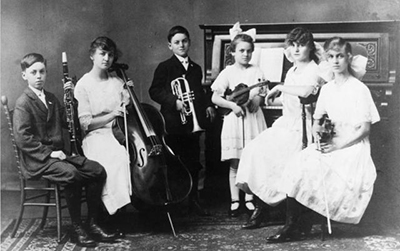 The Jalbert Orchestra, 1920s. The children of Arthur and Célina Simard Jalbert, L-to-R: Fern, Germaine, Conrad, Judy, Gertrude, and Gabriel. Louis Jalbert, who would later become known as Maine’s “Mr. Democrat” and represent Lewiston for 38 years in the Maine Legislature, played drums in the group with his brothers and sisters but is not pictured here. (photo courtesy of the Franco-American Collection, University of Southern Maine Lewiston-Auburn College).

To learn more about upcoming performances and menus, check the Event Calendar.