During the Industrial Revolution, new technologies led to high demand for laborers in Lewiston-Auburn textile mills, shoe factories, and brickyards. Economic hardships in their home country and the promise of a better life in America enticed people in many countries to leave their homelands. From 1870 to 1930, 720,000 French-Canadians left Canada for the United States.

Immigrants to Maine from Canada left their homes because of a poor economy: they couldn’t make enough money from farming and other jobs, land was expensive and being bought by Irish immigrants, and because Maine mill owners needed lots of workers.

F.X Marcotte is a store in Lewiston that was opened in 1888 by Francois Marcotte and the store is within sight of the train station. Often this store was the first stop for immigrants arriving by train. The store owner sold to Franco-Americans on credit. F.X. Marcotte sold everything from cradles to coffins. He found living spaces for new arrivals. The store is still open and is located on Lincoln Street.

When French Canadian immigrants arrived in Lewiston by train, they were one block away from an area that became known as “Little Canada” where many Francos lived. Francos had large families and lived in large tenement buildings built close together. Sometimes several families lived together until another apartment or other housing became available.

MODE OF TRAVEL FROM CANADA 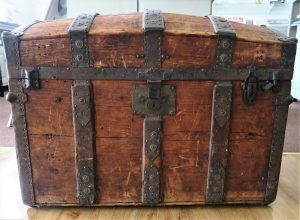 Many immigrants gave up everything from their original homes to come to this country. In the 19th century, passengers on ships brought very few belongings with them because the shipping companies charged them for every parcel brought on board. Immigrants made difficult decisions to determine which items to bring to their new homes. They often bought or made trunks in which to pack their belongings. Everything that fit in the trunk was all they brought.

Migration from Canada to Maine continued in large numbers through the 1930s. Source: Historian Ralph Vicew.

French-Canadians brought their customs to America:

The Francos stuck together and formed their own schools, hospitals, orphanages, social clubs, and newspapers. They taught each other English and how to prepare for naturalization tests (to become American citizens). The Francos established the first hospital in Maine, St. Mary’s in Lewiston. They built the first indoor ice arena (where the Colisee is). They founded the college that became the University of New England. In 1925, they hosted the first-ever international snowshoe convention. Snowshoeing and hockey were very popular sports.

For Franco immigrants, religion was part of everyday life and decisions. Church leaders provided guidance and instruction on how Franco immigrants should live their lives. Educated young women worked as teachers in Catholic schools. Children took part in religious activities such as singing in the youth choir.

In the late 1800s and early 1900s, there was one French-speaking parish in Lewiston, Saints Peter and Paul Church, which eventually was not big enough for all its parishioners due to the influx of Francos and the growth of Lewiston. The church was under the supervision of the Dominican Fathers. To stay connected to the established church while easing the overcrowding, a group known as the Sons of St. Dominic was formed from the SS. Peter and Paul parish. They met in a chapel at Lincoln and Chestnut streets for mass and religious exercises. They planned the building of St. Mary’s Church next to Little Canada. Property at the corner of Cedar and Oxford streets was purchased from Continental Mills on which to build St. Mary’s Church. It consisted of two tenement blocks and the land on which they stood. 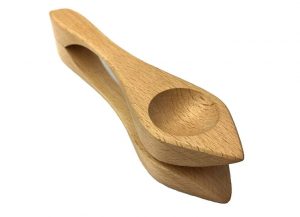 Musical spoons have been played for centuries and have become part of French-Canadian culture. You’ll hear them in folk music, and they’re brought out at parties and festivals. The wooden or metal spoons are knocked together to create a percussion accompaniment to fiddle or other music.

LISTEN TO A VIDEO OF MUSICAL SPOONS BEING PLAYED. CLICK HERE.

Immigrants from Canada to Maine visited their former homeland often which helped them keep their traditions alive more than immigrants who came across the ocean.

Adults earned $3.60 to $7 per week and worked 60 to 70 hours per week. This was more money than Franco immigrants could make back home in Quebec. 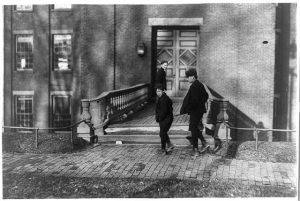 Employment was required of all members of the family as soon as they were old enough. That age was decided by the family. Some of the youngest paid mill workers were eight years old. In the mid 1800s to early 1900s, children were lucky to finish first grade before they had to leave school to help the family by working in mills, factories, farms, canneries, and other industries. Children earned pennies a day compared to adult workers. 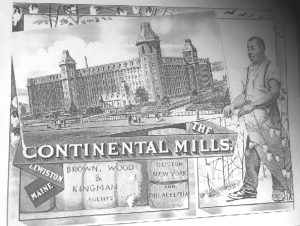 Advertisement for Continental Mills, built in 1858.

In the late-19th century, the United States produced 75% of the world’s cotton. New England was a leader in that production and Franco-Americans made up more than half of Maine textile workers. The cotton was produced in southern states by slave labor.

Where did Franco immigrants work?

DIFFICULTIES FOR THE FRANCOS

Anglo store owners and staff often did not speak French. The language barrier caused problems for foreign-language immigrants who did not speak English. On April 1, 1919, the state of Maine forbid the speaking of French in schools by passing the English Education Bill which was in effect until the late 1960s.  The Ku Klux Klan also tried to remove Franco culture and to prevent Francos from holding positions of power in Lewiston.

WHEREAS,  the State of Maine is named after the Province of Maine in France, and the towns of Paris and Calais owe their names to the capital city of France and the French port city of Calais, respectively; and

WHEREAS,  more than 1/3 of the population of Maine is of French and Canadian descent and Franco-Americans in Maine have contributed much to the beauty and quality of this State; and

WHEREAS,  French is the primary language of thousands of Maine citizens and there has been a resurgence in the use of the French language and a heightened appreciation of the Franco-American heritage throughout the State; and

WHEREAS,  clubs and organizations to promote French culture and language have sprung up throughout the State, including the Francophone Caucus at the Capitol; and

WHEREAS,  fluent French-English bilingual people are a cultural and economic resource to the State; and

WHEREAS,  cultural tourism can be greatly enhanced by the genuine Franco-American centers throughout the State, and the large Franco-American presence in Maine can further strengthen our relationships with Canada, France and the rest of the francophone world; and

WHEREAS,  the first Franco-American Day was celebrated on Wednesday, March 6, 2002 at the State Capitol; now, therefore, be it

RESOLVED: That We, the Members of the One Hundred and Twenty-seventh Legislature now assembled in the Second Regular Session, on behalf of the people we represent, proclaim that Wednesday, March 16, 2016 is Franco-American Day, to be celebrated at the State Capitol; and be it further

RESOLVED: That Franco-American Day be celebrated to commemorate the rich history of the French people in the State of Maine and the United States of America.

Our Scavenger Hunt game is to be used with the 30 display cases and objects located in our upper hall where the masses of St. Mary’s Church were held from 1927 until 2000. Items in these display cases were donated by local Franco Americans. These items were important to them and common for most Francos in the Lewiston-Auburn area.

CLICK HERE to download a PDF of the hunt game with some of the display information as examples of what the students will see during their visit.