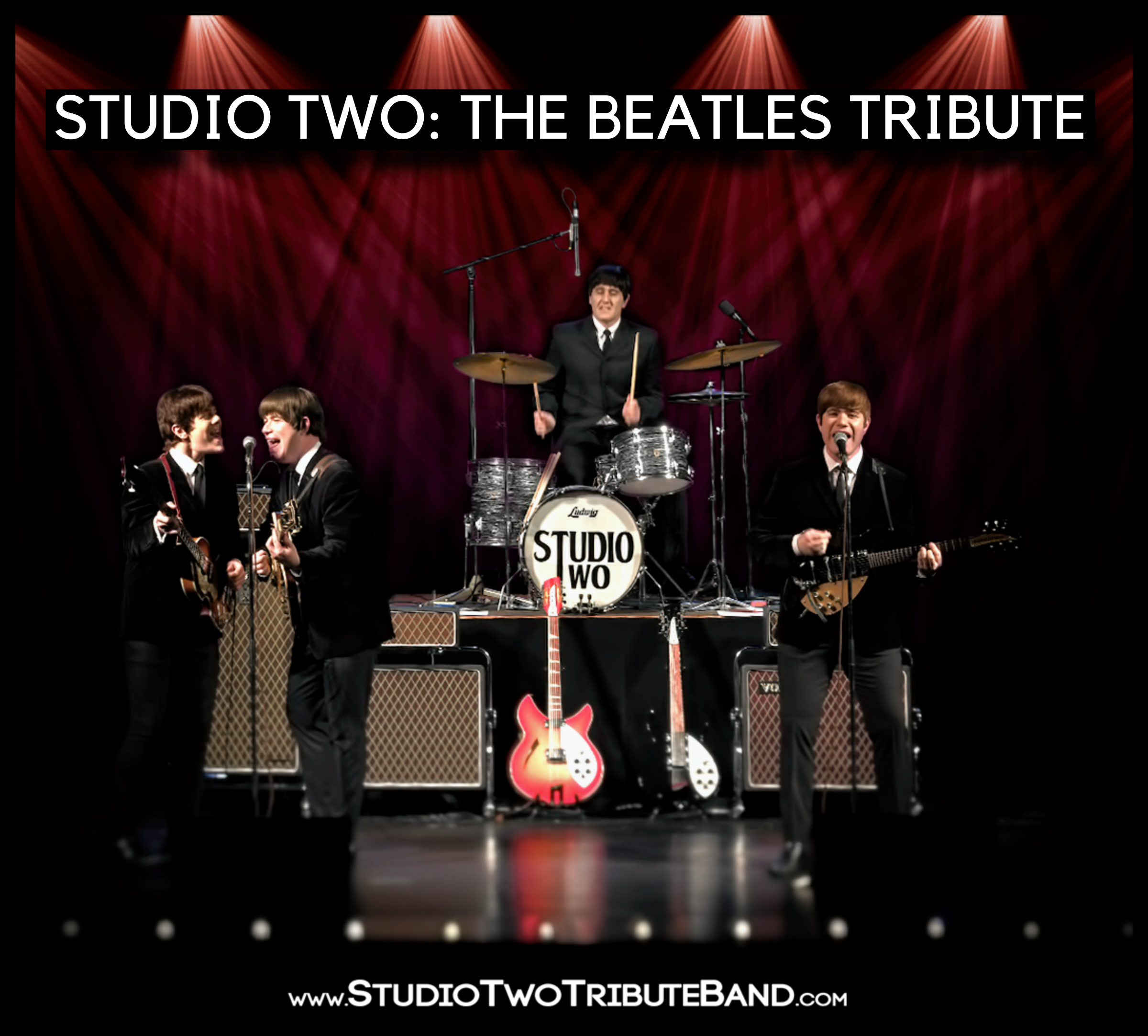 Band members are experienced musicians of today’s generation dedicated to preserving the memory and fan culture of The Beatles generation. By recreating the Fab Four’s music, appearance, instruments, and onstage banter, Studio Two performs favorite Beatles hits that will bring people to the dance floor.

At age 11, Steve Murray found an old guitar in the basement and has been playing ever since. A fan of many music genres, he became a Beatles fan after watching The Beatles Anthology documentary series in November 1995.

His grandfather bought him and his identical twin brother (who plays George Harrison in Studio Two) their first guitars: a Rickenbacker and Hofner bass and got them private guitar lessons. By the age of 12, the brothers were winning talent shows and band competitions for playing Beatles tunes.

Throughout high school, Steve played drums in an award-winning percussion ensemble and marching band, but never strayed far from his true passion of Beatles rock. An accomplished musician, Steve attended Berklee College of Music and played jazz and alternative rock music before co-creating Studio Two – The Beatles Tribute with his band mates.

In addition to playing John Lennon, Steve is a live sound engineer and currently serves as the band’s booking agent.

“As a trained musician, I never expected to be playing in a Beatles tribute band, but it has been an amazing experience. I am humbled to have an opportunity to portray John Lennon, who is one of the most talented musicians and composers of all time, and I am thrilled to bring Beatles music to a multitude of different generations. Best of all, I get to do this with my brother and best friends,” said Steve.

When Al Francis was two years old, his father introduced him to the music of The Beatles, which put him on the path to becoming a professional musician.

Francis’s first musical instrument was a makeshift drum and cymbal made from an empty five-gallon bucket and a pie tin. At the age of three, Francis’s parents gave him a three-piece drum kit, and knowing what was in store, also bought a supply of ear plugs for themselves – and for good reason. A few years later, Francis began plucking on a guitar, which led to learning how to play bass, as well as many other instruments.

In order to play bass like his idol, Paul McCartney, Francis even taught himself how to play bass left-handed. In 2012, Francis met Rob and Steve Murray. And the three forged lifelong friendships and the creation of what is now the Studio Two band.

“Never did I think that we’d be doing what we love to do this soon! Who could ask for more? Getting to play some of the most influential and most loved music ever written has been a dream come true. We’ve played some great shows and met some of the nicest people you could ever meet,” said Francis.  “And, to make it even better, I get to do all of this with a group of guys who are not only multi-talented musicians but some of the nicest guys you’ll ever meet. I couldn’t ask for better mates to be on tour with!”

Rob Murray picked up his first guitar at age 11 and has never been without one since.  Like his twin brother Steve, Rob was turned on to The Beatles by watching The Beatles Anthology documentary series in 1995. He is a Beatles trivia master and is particularly knowledgeable about the equipment The Beatles used – especially vintage microphones.

A graduate of Berklee College of Music, Rob is a trained guitarist with strong audio engineering skills. For example, he has been involved in helping Beatles documentary filmmakers to sync Beatles audio to rare concert footage.

When he co-founded Studio Two in 2012, all of Rob’s talents were put to use. In addition to playing George Harrison, Rob is the equipment guru, hunting flea markets, estate sales, and eBay to assemble the authentic gear the Beatles used in the early 1960s.

“Playing George Harrison and re-enacting Beatles’ performances from the early years has been a thrill. I love the vintage equipment and raw sound of the Beatles’ Hamburg era, and we take special care to ensure the look and sound is as close to authentic as possible,” said Rob. “Studio Two has been an amazing journey, and every day I look forward to meeting both old fans of The Beatles and new fans of Studio Two!”

Doors open at 6 p.m. Tickets are $30 in advance and $35 at the door day of show and can be purchased online at TICKETS, by phone at 207-689-2000 or in person at our box office between 10 a.m. and 1 p.m. Tuesdays and Wednesdays. Riverfront is at 46 Cedar St., Lewiston. Parking is available in the mill lot. The building is handicap accessible on the Lincoln St. Alley side.