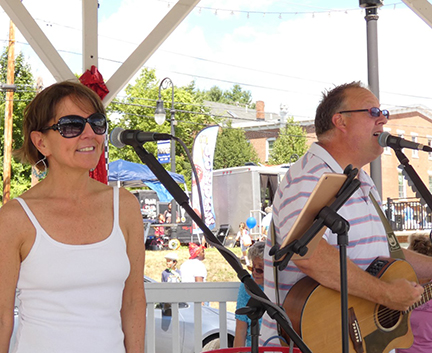 The Court Jesters will perform as part of the Franco Center’s Cabaret Night Series at 7 p.m. Thursday, April 20. The band is made up of two voices, one guitarist, and one tambourine player: John Hasnip and Tina Charest. Hasnip plays guitar, Charest plays tambourine, and both sing.

They perform all over the state of Maine and play a diverse array of original music and cover songs which have included, “Squeeze Box” by The Who, “Hotel California” by The Eagles, “8 Days a Week” by The Beatles, “Cecilia” by Simon & Garfunkel, “Stray Cat Strut” by Stray Cats, “Fat Bottomed Girls” by Queen, and “X’s and O’s” by Elle King.

Shortly after Hasnip moved from England to Maine, he had an opportunity to host open mic nights on a weekly basis, meeting new friends in a strange country.  It was in this circle that he met Charest, a Franco-American girl born and raised in New England who “loved to sing more than anything.” Together, with Hasnip’s passion-fueled guitar, Charest’s strong tambourine and their shared love of vocal harmonies, duo magic was created, according to their press release.

Hasnip’s musical influences are Elvis Costello, The Beatles, and Colin Hay; while Charest’s are Linda Ronstadt, Anne Murray, and Karen Carpenter.  Together, Hasnip and Charest make up The Court Jesters, bringing you a mix of genres from their diverse backgrounds, and possibly a shenanigan or two.  Their gigs are never the same, with energy and shared laughter filling the evening.  Cover tunes are blended with their own special style, and their originals are as heartfelt and genuine as they are.

Doors open an hour before the show. Tickets are $15 in advance and $20 at the door day of show and can be purchased online at www.francocenter.org or by phone at 207-689-2000. Tickets can also be purchased in person at our box office between 10 a.m. and 1 p.m. on Tuesdays and Wednesdays.