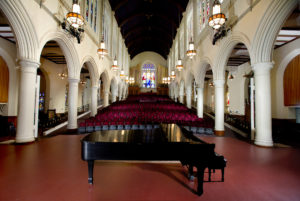 The Franco Center is as versatile as it is beautiful. It features two large rooms, each serving multiple functions and possessing its own individual charms. Despite its history as a former Catholic Church, it is now a non-denominational facility.

Upstairs is our Performance Hall, an elegant room with restored chandeliers, magnificent stained glass windows, world-class acoustics that must be experienced to be fully appreciated, and comfortable seating for 428 patrons with not a bad seat in the house. It also comes equipped with a 9-foot Steinway & Sons Series D concert grand piano (built and purchased new in 2006 from the factory, see this story by the Lewiston Sun Journal).  A large green room allows artists to relax before the show, and lighted cases of historical artifacts and walls adorned with old photos allow patrons to ponder the lives of those who worshiped in this same room for over 80 years when it was still known as St. Mary’s Church. Its lower half is also outfitted with a “hearing loop” system, installed for us by Central Maine Hearing Center at CMMC and designed to enhance the audio experience of those with hearing impairments who have cochlear implants or hearing aids outfitted with tele-coils, or “t-coils.”

Downstairs is our Heritage Hall, which sports an extensive bar as well as a large kitchen for catered events. It does double-duty as a nightclub for live music and comedy and as a banquet hall for wedding receptions, corporate meetings, awards ceremonies and other events such as French classes and our monthly La Rencontre luncheon. Decked out in tables and chairs, it can hold up to 275 patrons — and nearly 500 for standing-room only events. Like the Performance Hall, it also boasts its own piano, this one a 6-foot Boston grand piano purchased especially for Heritage Hall in December 2010 as a “baby brother” to the Steinway upstairs.  The room was completely renovated in 2009 to remove the many posts that were detrimental to sight-lines, strengthen support beams and install a new sub-floor.

The Franco Center produces its own concerts, dinners and events in both halls — and we rent them both out to local businesses, individual private parties, performing arts groups, educational and civic institutions and others, too. If you would like to know more about how you can reserve the hall to host or produce your own magical event here at the Franco Center, email us anytime or call us at (207) 783-1585 during regular business hours.